The ERA BS High Security Nightlatches feature an integral cylinder pull which protects the cylinder from being drilled, and comes with a 20mm bolt throw for increased security and strength. The cylinder of the 1830 & 1930 furthermore has over 30,000 cut key variations. This product is ideally suited for glass panelled wooden doors, as it has been designed with an ergonomic internal lockable handle offering added security against forced entry. The main lock bolt of the nightlatch “automatically” deadlocks, making the use of a credit card to force entry virtually impossible. The bolt can also be held in the withdrawn position yet only with the use of the snib feature. Finally, the BS 1830 & 1930 High Security Nightlatch conforms to British Standard 3621:2004 (BS EN 12209), and meets the tough criteria laid down by the insurance companies and police.

This product is ideal for solid and glass panelled doors.
An ergonomic internal locking handle which offers added security against forced entry.
Comes with a 20mm bolt throw for greater security and strength
Conforms to British Standard 3621:2004 (BS EN 12209)
The inside handle can be deadlocked by an anti-clockwise turn of the key from the inside so securing the lock against forced entry.
The bolt can be held in the withdrawn position (only) with the use of the snib feature.
Supplied with 3 keys

Skip to the end of the images gallery 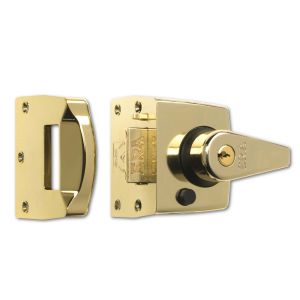 Skip to the beginning of the images gallery

Please use arrows above to see more Related Products.